If there’s an epicenter, a place where the history of Banff National Park springs from that would have to be Sulphur Mountain. 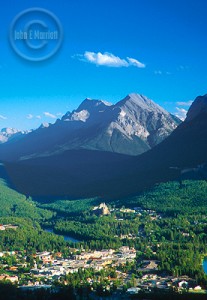 Sulphur Mountain gets its name from two of its most main attractions: the Cave and Basin toward the bottom of the mountain, and the Banff Upper Hot Springs further up. Hot springs, of course, are a welcome sight in the cold Canadian Rockies, and both of these places are well worth visiting.

The Banff Upper Hot Springs, one of nine commercially developed hot springs in the area, are seasonal springs, with water flow peaking in the spring and at their lowest in winter. In fact, since the early 2000s, spring’s flow has stopped completely in the winter, prompting Banff officials to keep the springs alive with municipal water. The water’s natural source comes from either Sulphur Mountain or nearby Mount Rundle, and it flows through the Sulphur Mountain Thrust Fault, geothermally heated to approximately 38 degrees Celsius.

The Cave and Basin Hot Springs was first explored in the mid-1800s, but they became a primary tourist destination toward the turn of the century when a pair of railroad workers climbed down a felled tree into the cave and realized what an opportunity they were looking at. Today, interpetive hikes and replicas of that time remain … along with the springs themselves, of course.

Sulphur Mountain is about more than just its hot springs, though, no matter how refreshing they might be. One of its attractions, of course, is the fact that it is a mountain, which means it’s there to be climbed.

Today, the Banff Gondola running along the eastern slope can carry you up to the summit. At the ridge, you’ll find two fine restaurants, a gift shop, and numerous lookout points from which you can see the Bow Valley to the west and east. Follow a boardwalk that begins on the north side and you can walk up to Sanson’s Peak, which has an elevation of 2,256 meters (7,402 feet).

For hikers and purists, the true summit of Sulphur Mountain can be reached on a scrambler’s trail on the south side of the mountain. It’s not a hugely difficult climb, and you can get a bit higher than you’ll see at Sanson’s Peak. Sulphur Mountain tops out at 2,451 meters (8,041 feet).

By the way, the meteorological research station remains intact. You can visit the site. It has been preserved as completely as possible.

In 1957, a new laboratory was built on the peak to study cosmic rays. That observatory was operational until 1978, but the building was removed in 1981. Now, a plaque marks the site where it stood.

So the next time you’re in the Canadian Rockies, come warm yourself at the hot springs of Sulphur Mountain, either before or after you climb to a rather spectacular view. Even in a place as special as the Rockies, this is one summit that stands out from the rest.