Flying high over the Canadian Rockies

by Paul Peters
Editor, CanadianRockies.net
The Canadian Rockies offer endless ways of seeing the parks through various activities. One of the most exhilarating and accessible activities is helicopter touring. Helicopter tours in and around Banff and Jasper National Parks offer an alternative view of the park. Tours are made to fit any person whether they are interested in heli-sking, heli-hiking or even heli-weddings and heli-yoga.

Get high above Banff and Jasper for some of the most spectacular views.

Yes, you read that last one right. Icefield Helicopter Tours, in conjuction with Martha’s Heli-hikes, offers a heli-yoga trip, which pretty much means all bases are covered for those interested in a heli-trip.

Ralph Sliger, owner of Icefields Helicopter Tours, talks about the unique opportunities heli-tours offer to people visiting the Canadian Rockies.
“You’re actually getting into the backcountry where there are no roads,” he says. “You’re seeing the actual wilderness. When you can see for 100 miles in all directions, it’s quite impressive. Gives you a sense for how big Canada actually is.”
You can probably guess from their name that Icefield Helicopter Tours features tours of the Columbia Icefields, one of the largest icefields in North America.

“When you’re out over the icefields,” he says, “as far as you can see there’s nothing but the icefields, peaks and glaciers. It’s a whole different world up there.”  While he says that the tours are exceptional, he notes that one of the most amazing things is actually getting out of the helicopter once it has flown you to a remote location. “When you get  out and experience the quiet of nature, well, you can’t get that anywhere else,” Sliger says. “That’s what we offer, it is an experience.”

Jo-anne Kobelt of Alpine Helicopters is equally enthusiastic about heli-hiking. Alpine, she says, typically takes customers out to Mount Charles Stewart. Normally, she says it would be an eight-hour hike, one-way, to get to Charles Stewart but the flight takes all of eight minutes. Despite the short flight, she says, “It feels like you’re in the middle of nowhere. This area is just pristine, there are no trails, it’s literally untouched. When we set down it looks like no one has ever been there.” 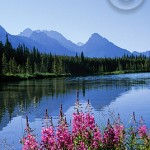 The views of the Rockies stretch for miles from a helicopter.

Alpine Helicopters helps keep that “middle of nowhere” feeling by only taking up groups of 15 or fewer, and making sure no one disturbs the natural features of the terrain. Gordon Stermann of White Mountain Adventures, the company that guides Alpine’s heli-hikes, says, “It’s an incredible experience for people to leave civilization completely behind in just a few minutes of helicopter flying. Once we land at the Charles Stewart site we are on our own. The world goes quiet, and you have time to slow down, look around you and … breathe!”  As far as the aerial tours Alpine offers, Kobelt says, “It’s a once in a lifetime experience. You just can’t believe what you see, it’s like a National Geographic film.”
According to Kobelt – they generally get two reactions from people the first time they fly over the Canadian Rockies.
“People either get up there and they don’t stop talking because they’re so excited,  or they’re mouths are hanging open and their eyes are glued to the window.” Despite these two reactions, she says, “We’ve never had a customer that doesn’t have a look of astonishment.” Children ask “Can I go again?” It is no surprise that people want to go again to get the most unique views of Banff, Jasper and all the other gems of the park. It is something special up here!