Get your vacation in Banff National Park and Canadian Rockies off to a running start with this easy guide. Astute readers may note that our 10-point guide actually has 11 points. Sorry. There’s just so much to do in Banff, it was hard to narrow it down.

Get a quick and beautiful view of your new surroundings from the Banff Gondola.

Catch the eight-minute gondola ride to the top of Sulphur Mountain and you’ll get an unsurpassed panoramic perspective of Banff. At an elevation of 2,285m (7,495 ft) high Sulphur Mountain provides 360° views of the surrounding peaks, Lake Minnewanka, the Town of Banff and the Bow Valley stretching from east to west. It’s easy to see why early inhabitants – carbon dating science has shown that to be more than 10,000 years ago – chose the valley bottom to travel through and establish summer camps. And the same goes for wildlife, which use the valley as a migration corridor to pass through Banff National Park.

The discovery of natural hot springs in 1883 eventually led to the establishment of Banff National Park, a vast wilderness that now encompasses 6,641 sq kms (2,564 sq mi). The Banff Springs Hotel opened its doors in 1888 and wealthy European train travelers came for months at a time to “take the waters”. Designed in the Scottish baronial style, in a nod to the town’s namesake Banffshire, Scotland, the hotel was designated a National Historic Site in 1992. The best view of this landmark hotel is from “Surprise Corner” on Tunnel Mountain.

The view of Banff Avenue from the historic Cascade Gardens is probably one of the most recognized photographs of main street and Cascade Mountain, one of the most prominent peaks in the area at 2,998 m (9836 ft.) Canada Place, located in the building that has housed the Parks Canada administration office since 1963, is a free family-friendly attraction. It offers touch-screen technology to help visitors discover Canada, including a simulated birch bark canoe ride to shoot the rapids of the Bow Falls as well as displays which highlight Canadian inventors and artists. Test your knowledge of Canadian trivia with the “Canucklehead” computer game.

They are giant freestanding pillars several metres tall that are made of silt, gravel and rocks cemented together by dissolved limestone. Sculpted over time by wind and water erosion and protected by a solid cap of rock, the Hoodoos can be found standing guard along the top of Tunnel Mountain. It’s the smallest peak in the Rockies to be called a mountain, at 1,692 m (5551 ft) and originally it was known as “Sleeping Buffalo” among the local Stoney Indians, for its bulky contours. Tunnel Mountain almost had a hole blasted through its middle in 1882 when railroad surveyors were devising a route through the Rockies. Luckily it was easier to go around.

This is the perfect place for a picnic lunch on the dock, with stunning views of Mount Rundle and Sulphur Mountain. There are three lakes along this road, where ospreys and bald eagles nest in trees, Canada geese breed in the marshlands and tundra swans stop by during each spring and fall migration. A natural hot springs bubbles into the third lake. You’ll hear the mournful whistle of the Canadian Pacific Rail trains as they cross the tracks at the far side of the lakes, a sound which has echoed through the Bow Valley for more than 100 years. Tourism in Banff and Lake Louise was first spurred by the creation of the CPR’s coast to coast rail system in Canada and luxury hotels were built for their comfort. 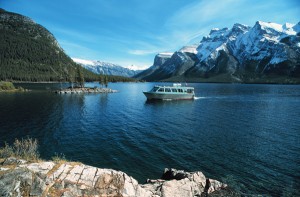 It’s the largest lake in Banff National Park at 24 kms (15 mi) long and 142 m (466 ft.) deep. Only scuba divers can view the remnants of a small town called Minnewanka Landing, after a hydroelectric dam built in 1941 caused the lake level to rise by 30 m (98 ft.). But most visitors either walk along the lakeside trail or sign up for the interpretive boat tour to learn about the history, native folk lore and geology. On the road up stop at Bankhead, a once thriving mining community from 1903 to 1922 that produced coal to power Canadian Pacific Railway steam engines. An interpretive trail winds its way around the remains of the old mining site, old machinery and crumbling foundations of the town.

It’s only a few minutes drive up a series of mountain switchbacks, but delivers a view of Banff and the Rockies that will take your breath away. From here you can clearly see the Spray River Valley as it cuts a swath between Mount Rundle 2949 m (9676 ft.) and Sulphur Mountain. It’s a view that generations of skiers at Mount Norquay have been treated to since the 1920s when Banff ski club members used horses and teams to clear logs for ski runs. A little ski cabin was built in 1928, but the first rope tow didn’t arrive until 1941 and the first chairlift seven years later.

The turquoise water draws its brilliant colour from the “rock flour,” fine particles of glacial sediment which are suspended in the water that reflect blue and green wavelengths of light because they are so small and uniform. Framed by Mount Victoria and Victoria Glacier, the water temperature only gets a few degrees above freezing in summer. The native’s called it “Ho-run-num-nay” or Lake of Little Fishes, long before they took outfitter and explorer Tom Wilson up for a peek in 1882, although he is credited with “discovering” the world-famous location. In 1890 a cabin was built on the shores of the lake, which is 2.4 km (1.5 mi) long, 500 m (1,649 ft.) wide and 90 m (295 ft.) deep and was later named for Princess Louise Caroline Alberta, the fourth daughter of Queen Victoria and later the wife of the governor general of Canada. Lake Louise is considered the birthplace of mountaineering in Canada, after the railway imported Swiss mountain guides to prevent its well-heeled guests from falling off the nearby peaks.

It’s a short and lofty lift but it will transport you to another world. A 14-minute ride brings visitors to an elevation of 2,088 m (6,850 ft) on Whitehorn Mountain. Along the way you’ll cross over meadows of wildflowers and green ski slopes that grizzly bears love to graze on during the summer. There are excellent views of the pyramid-shaped Mount Temple, one of the largest mountains in Banff National Park at 3,543 m (11,621 ft). As you look at the top of Mount Victoria and Victoria Glacier, far across the valley above Lake Louise, you are looking at the Continental Divide. All water that flows east will eventually drain into the Atlantic Ocean and the water on the other side of the ridge flows west to the Pacific Ocean. 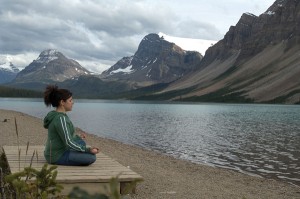 North of Lake Louise on Highway 93 about 33kms (21 mi), you’ll see the tentacles of Crowfoot Glacier cascading down the mountains, and to the north you’ll glimpse the stunningly blue glacier-fed Bow Lake. The rustic and secluded lodge on the shore with the red roof is Num-Ti-Jah Lodge, which is the native word for pine marten, a small but ferocious animal that calls the Rocky Mountain wilderness home. The octagonal-shaped lodge was built in 1937 by trapper and guide Jimmy Simpson, whose rapid snowshoeing through deep snow earned him the native nickname “Nashan-esen” or “wolverine-go-quickly.”