There are many things I don’t know, believe it or not. As Banff Insider, I thought my knowledge could not be surpassed but I was proved wrong when I took an early morning tour of Banff. I am going to blame my brain cell deficiency on the lack of sleep. Did you know that Banff is the highest town in Canada? Did you know Lake Louise is the highest village in Canada? It was Monday morning, the rain drizzled lightly and the unusual weekend fog continued to torment Banff drivers. Hopes were not high about how the success of this tour would go down when before we had even crossed the tracks on the way out of the town, we saw two elk jousting. Take that David Attenborough. 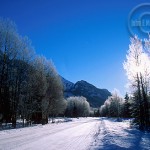 Banff on a bluer day.

I have driven around the towns of the Canadian Rockies more times than I can count, though I can’t count very high. However, doing a tour was better for several reasons. To start with I am a very lazy man, my car just about fits into the definition of a car and my typical passenger doesn’t usually share such useful knowledge. Just before stopping at Minnewanka, I was amazed by the slightly embarrassing origin of this country’s name. Dave the driver (not actually his surname) told us how when the British came over, an Indian chief invited a British soldier to talk in his Canada (home or dwelling). The British soldier refusing to listen to the interpreter insisted that the Indian meant that Canada was the name of the country. Better than Drabsville I suppose.

The story played in my head as I watched the eerie sight of Minnewanka. It felt like a scene from Lord of the Rings but without the feeling of doom and impending death. The peaks of mountains reflected off the turquoise water as mist and fog danced around the group. We drove through Banff town centre waiting for the fog to dissipate enough to get a good view and photo of the Banff Springs Hotel. Just as we were on the verge of giving up in the cool air, a gap appeared for a truly unique view of the stunning hotel. The next part of the tour was the Banff Gondola where some of the greatest sights of eight different mountains can be had.