Long trips can often be the most boring and repetitive drives imaginable. Concrete, cars and traffic lights begin to make you go crazy. However, it is a totally different feeling when you are being picked up from a glorious town like Banff, then driving across the Icefields Parkway (the world’s most beautiful highway) and ending up in Jasper. Add onto this the fact that Jasper Vacations pick you up from your chosen pickup point and while you are driving through the incredible scenery, the driver will share his vast knowledge about all things Rockies – you’ve got yourself a dream trip! 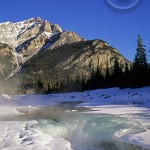 The sights of the Rockies make every road trip a pleasure.

Even before hitting the Icefields Parkway, the mountains frame every view from the big windows. It is impossible to take a bad photograph when this is your canvas. Video cameras beeped and cameras clicked as people forgot that this was transportation and not a tour! Snow covered trees zipped by as the driver answered questions from curious travelers. Blue skies clashed with the white jagged mountains on all sides and before you know it, we are on the most beautiful highway in the world. The 230km between Lake Louise and Jasper fully deserves its reputation. Sometimes it can really feel like a whole other planet.

As our driver John pointed out, it is rare to not spot animals on this 4 hour drive. It didn’t take long for this prediction to ring true. We saw a huge herd of elk as well as a curious herd of sheep who were licking the salt off the roads. My cameras memory card was almost full and I hadn’t even arrived in Jasper yet. Every time I put the camera back in its case, we would turn a corner and there would be something else that needed to be photographed. Though the Columbia Icefield was closed, the glaciers were still in sight as we cruised by knowing that Jasper was only around the corner.

The Jasper Vacations bus made it into Jasper half an hour early despite the wintery conditions. The sun had gone down and snow had been falling hard around the town and the ski hill. If this was a normal 4 hour drive, I would have been exhausted from boredom but as I arrived at the Mount Robson Inn, I was exhausted from sightseeing and information. Traveling between two of the most beautiful towns of the Canadian Rockies is one of the best journeys you will ever make. Just make sure to bring your camera!