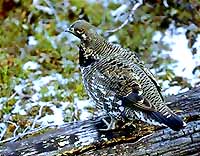 Birding is a sport that everyone can enjoy. All you really need is a pair of binoculars and a good field guide (or an experienced naturalist guide) to help you identify the different varieties of birds you will find in the Canadian Rockies. For a really close look at birds and other wildlife a spotting scope is recommended. A Checklist of Birds Found in Banff National Park is available from Park Information and Visitor Centres.

Over 260 species of birds have been recorded in Banff National Park. Spring and early Summer are by far the most productive seasons. The best time for birding is between an hour before sunrise to 9 or 10 in the morning. Birds are generally more abundant in the montane and wetland habitats of the lower Bow Valley than in other areas of the park.

The Banff Townsite area, the Cave and Basin Marsh, and Vermilion Lakes are all productive birding areas. In order to locate some of the more interesting western species, such as the Varied Thrush and the Townsend’s Warbler, an ability to recognize bird songs is indispensable.

The most productive areas in the vicinity of Banff Townsite are the older residential areas at the foot of Tunnel Mountain, the Bow River upstream from the Bow River Bridge, and the area around the riding stables and recreation grounds below Cave Road. The residential areas have many old spruce, pine and poplar trees and ornamental gardens. The riding stables area near the recreation grounds is a semi-natural setting of willow, spruce and marsh.

Early migrants are frequently seen in the townsite before they occur elsewhere because of the warmth and early snow melt in the lower Bow Valley. Red-winged Blackbirds, Song Sparrows, and American Robins apear late in March, particularly near the horse stables. The first Violet-green and Tree Swallows are likely to be seen over the Town in late April.

Cliff Swallows nest on the Banff Avenue bridge and Violet-green and Tree Swallows nest in the townsite near Banff Avenue and feed over the Bow River. Robins, Starlings and House Sparrows are common (Starlings and House Sparrows are rarely seen elsewhere in the park). On Tunnel Mountain there is a chance of spotting Clark’s Nutcrackers, Pygmy Owls and Cassin’s Finches.

Winter along the Bow River in Banff Because of the abundance of House Sparrows, Clark’s Nutcrackers, Black-capped, Boreal and Mountain Chickadees, and occasional Red-breasted and White-breasted Nuthatches, occasional raptors such as the Pygmy Owl and Sharp-shinned Hawk remain all winter in the townsite area. These are most readily found by checking power lines and tree tops. Dippers winter at Bow Falls.

Song Sparrows and Red-winged Blackbirds are often found here before they appear elsewhere in the park. Throughout the willows you may find other early migrants such as Ruby-crowned Kinglets, Orange-crowned Warblers, and Dark-eyed Juncos. Waterfowl are abundant.

An abundance of waterfowl and small song birds breed in the marsh and surrounding forest. Mallards, Green-winged Teal, and Barrow’s Goldeneyes are the most common ducks. Warbling Vireos, Yellow Warblers, Common Yellowthroats, American Redstarts, Wilson’s Warblers, Song Sparrows and Savannah Sparrows all contribute to the clamourous dawn choruses of June mornings and make this area well worth visiting. Some consider it to be a paradise for warblers.

This is a major migratory waterfowl staging area where you will commonly see Mallards, Blue-winged Teal, Green-winged Teal, Lesser Scaup and Barrow’s Goldeneye. Common Snipe, Killdeer and a few winter rarities may also be spotted.

Vermilion Lakes Drive begins west of Banff townsite 100 metres south of the Norquay Interchange with the TransCanada Highway and runs parallel to the TransCanada for 4 km. The Vermilion Lakes are a large wetland area of sedge and willow flats and shallow water bodies connected by many small channels. Stands of mature white spruce border parts of the lakes.

April to late May:

This is probably the most important single area in Banff National Park for migrant waterfowl. As soon as open water forms along the lake edges in late April, flocks of the common species as well as occasional Tundra Swans, Cinnamon Teal, Northern Shovelers, White-winged and Surf Scoters, and Hooded and Common Mergansers begin to arrive. Bald Eagles nest in the area and are seen regularly. Canada Geese nest along the lakes and frequently take over Osprey nests before their owners return.

An early morning walk or canoe trip can produce an impressive variety of bird species that breed in and around the lakes. Rarities you may be able to spot here include American Bittern, Red-necked Grebe,Pied-billed Grebe, Cinnamon Teal, Wood Duck, Barred Owl, Pileated Woodpecker, and Eastern Kingbird. Bald Eagles and Osprey both nests beside the lakes.

Starting with an accumulation of juvenile Mallards, Teal and Hooded and Common Mergansers in August, the number of waterfowl using the lakes increases to a peak in the last half of September.

Common Redpolls and Snow Buntings feed in the frozen marshes and lake edges, especially in early winter. American Dippers are almost always present at a small warm spring on Third Vermilion Lake, as are a few Mallards and Common Goldeneyes.

On Highway 1A 23 km. west of Banff (just west of Castle Junction). Park at the Johnston Canyon trailhead and follow the trail up Johnston Creek 3 km. to the lower falls or 5 km. to the upper falls. A narrow, shady canyon, kept moist and cool from spray, is surrounded by a mixed spruce and pine forest.

Johnston Canyon is one of only three known breeding sites of the Black Swift in Alberta. The nests are difficult to spot high on the walls of the canyon, but the adults can be seen leaving the canyon in the early morning and returning near dusk. Dippers nest in the canyon and the surrounding forest is a good area to spot Winter Wren, Cordilleran Flycatchers, Townsend’s and Yellow-rumped Warblers.

Bow River from a helicopter 5 km west of Banff townsite The Bow River parallels both the TransCanada and Highway 1A from Banff townsite to Lake Louise. There are numerous access points to the river from both highways. The Bow is a small river that is frozen much of the winter and runs brown from glacial silt from Spring thaw until mid-July. It flows and meanders through subalpine and montane willow meadows and lodgepole pine and spruce forests.

Harlequin ducks gather along the Bow at this time of year before dispersing – the females to nest in small mountain streams and the males to return to the Pacific Ocean. Watch for them on gravel bars and small islands. You may also spot American Dippers, Spotted Sandpipers, Bohemian Waxwings and Common Mergansers. If you are canoeing please stay far enough from waterfowl to keep from flushing them. This is a popular canoeing river and a sensitive time of year for breeding waterfowl.

Bow Summit is located 20 km. north of the TransCanada Highway on Highway 93N or the Icefields Parkway. At this summit there is a parking lot on the west side of the highway with a trail that leads 1.5 km. through the alpine to a scenic viewpoint at timberline. This is an area of open subalpine forest with Subalpine Fir and Englemann Spruce that gives way to stunted fir with heath and herb meadows at higher elevations.

This is a very good place for an early morning walk to look for such mountain specialties as varied Thrushes, Fox Sparrows, Hermit Thrushes, and Clark’s Nutcrackers. Those who spend time above the trees can expect to find White-tailed Ptarmigan, Water Pipits, and Grey-crowned Rosy Finches. In the meadows below the summit look for the Savannah Sparrow, Solitary Sandpiper, Water Pipit, and Mountain Bluebird.