Calgary to Edmonton by Car

One thing I have learned since the purchase of my most recent and least reliable car ever is that nothing is simple. If the car travels for an hour and only breaks down once, this is a great success. If it makes it all the way to its destination without any unnecessary stoppages, then the car gets its own celebratory ticker tape parade. Having a terrible car in a place like Banff forces you to become an amateur mechanic. Slippy roads, cold engines, and steep hills – anything that can go wrong nearly always does. The drive from Calgary to Edmonton is one that a lot of people have to make and you will be glad to know that it is a much more straightforward drive. 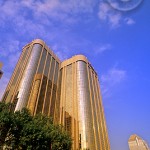 Leave the pressures of the big city behind and head to the Rockies.

Now you may have noticed, I said this is a drive that people HAVE to make. You may have to come from one of the airports to pick up someone who is hopefully worth it. However, be warned this is not the magical mystery tour. It is actually quite a boring but easy drive. The first part of the drive can be quite nice, especially if you make it early in the morning when the sun is coming up and the roads are empty. Rolling hills and flat prairies lead you all the way through Red Deer. There is an official Calgary to Edmonton Trail which at first seems no more than a dirt road once used by wagons and carts.

Scottish settlers used to use Red Deer as a stop over point long before Tim Hortons became the most popular stopover point. It is a nice little town to stop in and recharge the batteries with some delicious coffee. At this stage you make it onto the David Thompson Highway which is a less traveled but really picturesque drive to the Rockies at the southern end of Jasper National Park. It is a great feeling pulling away from the big concrete roads into the little quaint town of Jasper.