Do you remember the days when flying from A to B used to cost an arm and a leg and then another arm? Long gone are the ridiculous prices. Competition has increased rapidly over the years much to the delight of jet setters. You can fly from Calgary to London for as little as $250 if you plan far enough in advance. Depending on price, fly to Calgary if you are coming to Banff / Lake Louise and to Edmonton if you are coming to Jasper. It is also possible to fly to Vancouver though a ten hour (scenic and not as bad as it sounds) drive is the price you will pay. 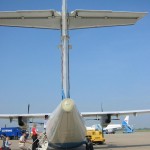 Leaving on a jet plane - you know that you'll be back again!

Air Canada / Jazz: These guys cater for all. International flights connect through all the usual cities such as Toronto, Vancouver and Ottawa. Their list of destinations nationally or otherwise is pretty comprehensive.

Hint: For those travelling between Canada and Britain, there is a little known website called CanadianAffairs. If your timeframe is flexible, this is comfortably the cheapest option around. Just don’t tell too many people!

Once you land at your destination, the distances vary. Renting a car or taking the bus with a company like SunDog is usually the best option. Some of the road trips from the airport can actually be quite enjoyable, even the 10 hours from Vancouver. Some, however, are a little on the boring side (Edmonton to Banff). Either way it will be worth it when you set your eyes on the stunning mountains that stand guard around the Rockies’ towns.

Other ways of getting to the Rockies’.