Sometimes I get emails from people who aren’t asking me to pay a bill or to subscribe to the latest Viagra upgrades (useless by the way). There is plenty of information about the towns of the Canadian Rockies but sometimes, there are some questions that can only be answered by your very own Banff Insider. If you have a question that needs answering before visiting, email me at johnm@canadianrockies.org and if I can’t answer it, I’ll walk through Banff in the peak of winter with only my hat on! 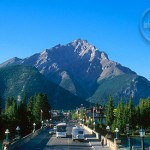 Is there anything you want to know about Banff?

There doesn’t seem to be too many electronics shops around Banff. My laptop cord has just gone caput. I don’t suppose by any chance you know where I could get it fixed?

Banff is quite a touristy town so you will find plenty of camera shops around. There is also a Source shop downstairs in the Cascade Mall just off Bear Street. However, for something more particular like a broken laptop cord, your best bet would be heading to Canmore. It is only 20 minutes drive away and caters much better to all this type of stuff. There is a shop on Main St. called Metron Technologies that should be able to help you. There is a guy in there called Lee Loney who is an IT tech and knows more about computers than Bill Gates. For any technical problems you have, this is the place to go.

I have heard the cost of living is quite expensive in Banff. Is it as bad as people make out?

This is probably the question I am asked most. The truth is yes, Banff is fairly expensive but it doesn’t have to be. If you are careful, you can live quite cheap. Particularly if you are renting a house, you can shop in Safeway, buy your drinks for cheap in Locals Liquor and eat at the cheaper restaurants or when they have specials. Also because it is such a small town, pretty much everything is walkable. Taxi costs are practically nonexistent. It is only expensive if you make it expensive.

2 comments on “Frequently Asked Questions about Banff and Canmore”