I recently had a friend passing through Banff for one day only much like an Elton John show. She had spent two weeks in Vancouver researching what to do when the Winter Olympics come around and then shamefully only one day in gorgeous Jasper and then this bombshell – only one day in beautiful Banff. Simply put – there is far too much to do around these parts that you can fit into one day. However, they don’t call me the Banff Insider for nothing – activities are my middle name and I am not one to disappoint pretty visitors.

Lizzie, my guest seemed somewhat reluctant to stay on my couch – perhaps fearing the remnants of Greek takeaway food that also call my apartment home. Instead I picked her up bright and early at her hotel and we headed to Evelyn’s Café to get the day started with a muffin and some caffeine – essential. From here, we organized the day. Unfortunately the snow hadn’t hit too hard just yet so the skis and snowboard had to remain in storage as we headed into the crisp air to walk the Bow Falls ‘hike’. Now I use the word ‘hike’ lightly as it is really a gentle ramble that offers undeserved and stunning views of the Bow River from a height and the Banff Springs Hotel from a distance.

We made it back into town refreshed, feeling healthy and ready for a lunchtime beer in St. James’ Gate Irish bar where we munched down on a couple of burgers the size of a small country. Feeling suddenly lazier, we hopped into the Pink Machine – my once red station wagon and made the 40 minute trip to Lake Louise. Lake Louise is my secret trick when it comes to impressing visitors. The Fairmont Chateaux is fantastic for a cup of tea and a scone but it is what’s outside that never ceases to make people gasp. Lake Louise itself is one of the most underrated and romantic spots on offer – not that I was trying anything untoward! The backdrop of overbearing mountains shelter a turquoise coloured lake where canoes glide gently over the waters surface.

On the way home and just outside Banff town, the Minnewanka Meander is another great option for trying to impress people in a short time. Two Jack Lake has a stunning reflection of the Rocky Mountains covering its whole surface. Better again, I have never made this drive / walk without seeing some wildlife and once again we weren’t disappointed. Two huge bull elk strolled nonchalantly along the side of the road enjoying the tasty grass on offer. It has gotten to the stage where they have no fear of humans so we got nice and close for photos. 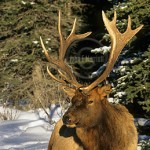 It is quite common to see elk strolling around Banff Town.

Thoroughly exhausted after a day of sightseeing, a quick trip to the sauna in the Banff Centre was certainly called for before hitting the Pump & Tap for some $10 jugs of beer. Lizzie was by now so exhausted that she was almost willing to sleep amongst the Greek leftovers. Instead she made the trip back to her hotel with the dreams of wildlife and Lake Louise in her mind. Either that or nightmares of the pink station wagon. One day in Banff may not be enough but it doesn’t mean it can’t be extraordinary!