Take the Bait While Fishing in Banff

It is tough when you have an activity that you are passionate about that is seasonal. When the snow begins to fall and the ski slopes are officially closed for summer, it feels like you have lost a loved one. It reminds me of my childhood watching the snowman that we built the day before melt slowly with the rain in the garden. Usually fishing is a good example of this. In most countries, when the winter hits, it is simply too cold to fish. You would think this goes ten fold in the Canadian Rockies where winter can be harsh to say the least but no! Passion always wins out! Ice Fishing is the way around the problems of the cold and what a way around it is. 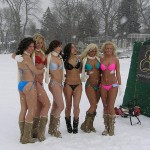 Just because the weather is cold, it doesn't mean you have to stay inside!

When I think of Ice fishing, I imagine myself sitting frozen solid by a lake with schools of fish looking at me giggling as I grimace uselessly. At Banff Fishing, they obviously planned things a bit better. Located 15 miles south from Canmore or 40 minutes from Banff, there are four HEATED huts with a variety of fish such as Lake Trout and White Fish to try your luck / skill with. If this isn’t enough for you, they also provide a service where you can cook the fish you caught on site. For anybody who has ever caught fish straight from the water and eaten it, you will know that nothing in the world tastes better. Hot chocolate and hotdogs are also provided just in case!

If you are feeling a bit more adventurous, Banff Fishing offer a year round Bow River Fishing option. You can ‘walk and wade’, fly fish or spin cast for Brown Trout. Even in winter, there are good amounts of water that have not frozen over and this is where you will be brought in your warmest clothes. Because of the low water conditions, the fish population are as crowded as downtown New York. Just like it is easier to mug people in New York as a result, there are also some great angling opportunities up here in the Rockies during the winter months. Not only are there more fish during winter but there is also some big, big fish to be caught. There are some great programs in the summer too but for now, let the hardcore fisherman in you come out in the Canadian Rockies!

See the latest conditions live with the Banff web cam.