Before I made one of the best decisions of my life – moving to Banff – I was constantly warned to expect the most expensive place on earth. From someone who has lived in some of the most expensive cities in the world (Vancouver put your hands up), I was a little apprehensive as I drove for the first time past Canmore into Banff, the jewel of the Rockies. However, after settling in I quickly realized I was being mislead. If you know where you are going, Banff can be remarkably cheap. That is where your faithful Banff Insider steps in. 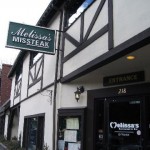 Melissa’s is a great place to go for a meal (especially breakfast) but it also kicks off at nighttime. On Sunday nights, which are generally considered local night, the upstairs bar becomes a haven for people searching for fun. There are great drinks specials such as $2.75 highballs and cheap beers and best of all, there is an old fashioned popcorn maker where you are encouraged to help yourself to as many free baskets as you can manage. Unsurprisingly considering the mix of alcohol, good spirits and free popcorn, food fights are common. This is all part of the cool atmosphere in this little place. Take note that though it may be fun to throw popcorn at friends, it is generally not the best way to pick up women. Who would have thought?!

The staff is as chilled as the customers and takes everything in their stride. If you fancy a quiet drink, there is the option of taking one of the hidden away tables or if you are feeling more boisterous, link onto one of the booths and join the fun. Generally people come here for a quiet few drinks but always seem to end up in such a good mood that a trip to the Devils Gap to watch live music and ultimately a trip to Aurora’s is not at all uncommon. Banff and the towns of the Canadian Rockies are only expensive if you choose them to be so. Sometimes the best things in life, like popcorn, are free!