The Athabasca Glacier is North Americas most visited glacier and for a good reason too. As we stepped onto the Ice Explorer bus (each worth almost one million bucks), we were informed that this was a relic of the last ice age. “The Ice Age is still here” as driver Travis pointed out. Light snow jumped impatiently at the windows around us as we slowly, and I mean slowly, made our way onto the ice. The Ice explorers obviously are made for this kind of travel and I’m not sure any other vehicle would suffice for such a challenging climb and decline on ice like this. Nonetheless we made it to the Athabasca Glacier after driving all the way from Banff and immediately were silenced in awe. 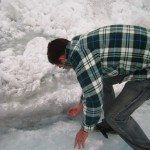 Extreme cold is no excuse not to take a sup from the flowing fresh glacial water at Athabasca.

Though the glacier unavoidably retreats hastily every year, it is still nothing short of huge. Tourists took photos of the 360 degree views of the majestic peaks that surround the glacier. The driving snow did nothing to slow the enthusiasm of visitors of all ages and nationalities strolling about this ancient relic. One can’t help but feel like one of many needles in a giant haystack when standing here. The temptation is to cruise alone outside the cordoned off areas but we were warned. There are still huge and fatal crevices around the glacier. Every year there is at least one avoidable death and as I have no life insurance, I kept well within the boundaries.

After drinking some of the fresh flowing glacial ice water on offer, I was now officially frozen and ready to escape back into the warmth of the bus with beautiful photos safely in camera. We made it back to the café at the Icefield Centre – strangely home to the largest collection of women’s toilet stalls (64) in North America. Rudely, I was not allowed access to view this odd record! From here (the centre – not the toilets) we made the long drive back to Banff via a few more photo stop offs. After almost 10 hours of some of the worlds best sightseeing, wildlife and photos, we made it back to the hotel just as the sun set on Banff Avenue. This exhausted there was only one thing we could do – a quick walk to the Pump and Tap to talk about our day over a beer before finally I could make it back to my waiting bed to try and imagine what exactly a mountain goat looks like!