Some Different Activities to do in Canmore, Jasper and Banff

Take it from a man who has spent most of his impressive life in the fresh mountain air of Banff and the Canadian Rockies, there is no shortage of things to do. Everything from rafting to hiking is literally a stones throw away (though I am not reccommending throwing rocks at hikers).  However, sometimes this just isn’t enough for you energy-filled visitors! For some choices that you might not have heard about yet, I have compiled a wee list for your perusal. 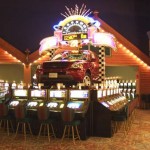 The neon lights of the casino.

Casino of the Rockies
Those against gambling might suggest that the feeling of watching your hard-earned savings drip down the thin hole at the roulette table is enough to ruin your vacation. Those who adore gambling would argue that the feeling of elation when you get that elusive 21 at Blackjack is incomparable. However, the wiser amongst us should just go along with a set budget, place a few fun bets and admire the atmosphere.

In the St. Eugene Mission Resort, the Casino of the Rockies is part of the Lake City Casino franchise. They have all the usual casino games as well as other fun options like Sega Horse Racing, Let it Ride and Three Card Poker.

The Ghost Rider
Not for those with weak hearts or who are likely to scream like a girl amongst their friends. You know it’s going to be good when the story starts with ‘Legend has it’. Anyway Local legend states that the shadow that you see on a summer’s eve on the face of Mount Hosmer is actually that of an Indian princess who rides on horseback as her father the chief leads the horse. Apparently the Chief put a curse on Fernie when William Fernie (the town’s namesake, not coincidence) refused to marry the princess as promised in exchange for information about local coal deposits. Just your usual wedding agreement. Every visitor has their own interpretation of the shadow and it is well worth making your own.

Burgess Shale
It is not so easy these days to earn a UNESCO World Heritage Site but the Burgess Shale is one of Canada’s most significant historical findings and has thoroughly earned its long winded badge. The name itself refers to a number of fossils found in the Walcott Quarry that date as far back as 500 million years. Back then, not only would Liz Taylor only be in her teens but the town of Field would have been part of the sea floor.

Through switchbacks, up steep slopes, around sharp curves, the Bavarian City Minion Railway winds through the narrow valley of Mark Creek. All the time, you will be learning as you enjoy the spectacular views and hear the fascinating history of the ‘Great Sullivan Mine’ and the community of Kimberley. The railway links the downtown of Kimberley all the way through to the Kimberley Alpine Resort. This is excellent and informative for all the family. 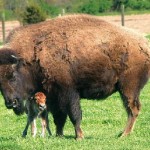 Buffalo takes a youngster under its wings.

The Buffalo of Alberta have suffered pretty hard over the years. There were once around 60 million of the great beasts roaming free in the 17th century. However because of how tasty they were, the rising popularity of buffalo wings and over hunting, the good times came to an abrupt end. Remarkably they are now on the endangered list in the province. The Waterton Bison Paddock has a protected herd of rare Plains bison that you can come and visit. Not quite as cool as watching them roam free but an important and sad reminder nonetheless about their history.

For more ideas go to Guided Tours and Activities.