Posted by Administrator May 28, 2009 The Mountain Man Blog
1 Comment 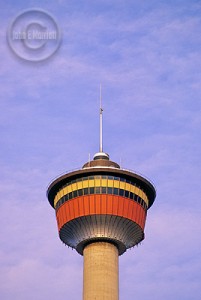 As my nomme de blog suggests, I don’t get out of the mountains of the Canadian Rockies all that often. There’s plenty to see in Banff and Jasper National Park, enough for a whole life time, and so I hardly ever feel the need.

So I tell people. But, in the interest of full disclosure, this mountain man will admit that every once in a great while, he gets an urge to go somewhere competely different. To a place where people outnumber wildlife, and cars outnumber people. Yes, the big city.

Now for me, the closest place to satisfy my big city urges is Calgary. Really, it’s sort of hard to believe that from my wild mountains, I can be standing in the middle of such a big city in just an hour and a half. In the past, this quick transition hasn’t been such a good thing for me.

Imagine a man, a mountain man, who spends most of his days traveling in the quiet backcountry, on trails, down rivers, and on ski slopes. Not worried about traffic, he just kind of goes where ever the trail/river/slope takes him. Now, in just a short space of time, stick him in a big city.

Last time I was there, I committed no less than 12 traffic violations, ran over three hot dog carts, caused one of the worst traffic jams in the city’s history, and almost knocked over the Calgary Tower. At least that’s what the police told me later. I don’t remember a thing, just a blur of tail lights and spilled hot dogs.

Since then, I’ve taken under advisement the Calgary Police Service’s advice, which was something along the lines of, “Don’t you ever, ever, ever, ever, drive here again.”

I was bummed at first, because Calgary offers some of my favorite attractions, including the Calgary Flames pro hockey team, and the Calgary Stampede, which is a great setting for seeing some of the old west sports, hearing good music, and eating good food.

Anyway, not long after my Calgary driving ban, I was complaining to a friend about how I was going to miss the Stampede that year, when she pointed out that I didn’t need to miss it at all. That’s because plenty of local companies offer great guided tours of the city, leaving right from the Canadian Rockies.

Never since have I had to worry, as I’ve kicked back in a luxurious touring van, and watched as the lights approach over the plains. The guides will tell you all about the city, and make sure you get the most out of a trip to see the Flames or the Stampede. Now that I’ve traveled to Calgary this way, I can’t imagine why anyone, even a vacationer in the Canadian Rockies, would want to ruin the mellow mountain vibe they’ve been cultivating by having to worry about big city headaches, like moving violations.

Take a Mountain Man’s advice, and let someone else do the driving for you.

One comment on “Mountain Man and the City (of Calgary)”