The desk jockeys here at CanadianRockies.net who run our internet machine have been updating our stories on local hikes lately, in preparation for spring in the Canadian Rockies.

Looking over the shoulders of these green horns got old mountain man relating some the tales of his past, almost entirely true exploits around Banff National Park. 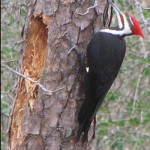 Like the time I went for a little day hike around Johnson Lake, and got lost. Let me tell you, it’s really a feat getting lost on a hike that is technically a circuit, but the mountain man follows no trail except that laid out by his destiny, and that will occasionally get you lost.

I had just passed the dam, a little bit after the first mile of the hike, when I came across a pileated woodpecker just standing there in the middle of the trail (those are the ones with the red Mohawks, like Woody the Woodpecker).

I stood for a moment and watched him from about five feet away, figuring I’d never get such a close view of one of these beautiful creatures again.

He cocked his head and watched me, thinking he’d never get so close to a real mountain man again. Or so I thought.

After about 15 minutes of standing there, I decided to get on with my hike. The bird, let’s just call him Woody, hadn’t yet moved, so I took a few steps off the trail to walk around him.

And that’s when he started in. Woody mirrored matched me step for step, hopping right along in front of me. I stopped, he stopped. I started again, and he kept up, staying about five feet away.

I laughed out loud then. Even as a mountain man, I’d never heard of a bird doing such an unbelievable thing, except in whacky cartoons and Mark Twain stories. But after a few minutes testing, him, walking back and forth, trying to fake him out, I started to get downright irritated.

I charged straight at him, playing chicken with a bird. But Woody wasn’t the one who flinched. Instead he flew up, flapping his wings in my face, and pecked me square in the middle of the forehead.

Probably none of you have ever been pecked by a woodpecker before, and take it from me, it should be avoided at all costs. It was like my skull was a big bell, and someone had just rung it real hard.

It took me a second to get my bearings, and when I did, there was Woody, standing right in front of me, daring me to try that again. 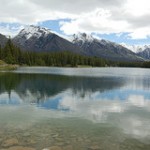 The Johnson Lake circuit is usually a quick and easy hike.

Well, I’d had enough, and I turned around and started to run the other direction, and next thing I knew, there was a flapping at my ears, my head was ringing, and that confounded woodpecker stood there in front of me, giving me the stink eye.

Well I’d had about enough of getting pecked in the forehead, and was feeling slightly woozy from it, when I hit on a plan.

I carefully reached back and took my old cook pot off carabineer I use to keep it on my pack. The woodpecker shot me a strange look, then put things together and leapt up toward my face again.

Before he got to me, I got the pan over my head just in time to hear a loud clang. My ears rang a bit, but I still had my senses. Looking down at the ground, I maneuvered myself back to the trail, Woody clanging away at the pan the whole time. When I found the trail, I started walking.

I thought I was on the way back, but with the constant clanging on the pot, and my head still ringing from those initial pecks, I must have ended up on a goat trail.

After a few hours, the pecking stopped, and I carefully took the pot off my head, only to find myself on the thinnest of trails near the top of a mountain, with Woody nowhere to be seen.

Needless to say, with my mountain man mountaineering skills, I was down and back to my truck in just a couple days, before anyone even noticed I was gone.