As summer inches closer to the change of the seasons, tourists are still arriving in large numbers and many of these won’t want to miss the famous Columbia Icefields. If you’re an adventure seeker like myself and would like to walk on your first glacier, the Athabasca Glacier located on the boundary of Banff and Jasper National Parks is a great place to start.

I’ve walked on a more than half a dozen glaciers, but my favorite glacier walk continues to be the Athabasca. Getting to the glacier is part of the fun, along the Icefields Parkway the scenic route that takes travelers  over 230km from Banff to Jasper along the shoulder of the Great Divide, passing alpine lakes such as Lake Louise and affording amazing views of Victoria Glacier, Athabasca Falls, Lake Peyto, Crowfoot Glacier as well as other natural wonders. 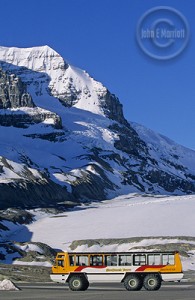 The Snocoach poised and ready to embark on the Columbia Icefields.

If you’re timid, you might want to call up my friend Paul Hardy over at Sun Dog Tours. He takes tourists along the Icefields Parkway as well as up onto the glacier. Sun Dog has its very own Snocoach, or a special with some serious tread meant to drive over ice.

“It’s without a doubt the most popular attraction in the Rockies” Hardy told me once we were in the Snocoach. “And the Icefields Parkway is one of the most spectacular stretches of highway in the world and it is often referred to as the Wonder Trail”

The Columbia Icefields are considered one of the largest accumulations of ice and snow south of the Arctic Circle, and can reach depths of 2,000 feet. The Columbia Icefields feed all three, Arctic, Pacific and Atlantic oceans, making it a primordial source of water for the northern hemisphere’s ecosystem.

The day tour, which takes some 5-6 hours of the day, runs at US$130 per person, including the 90 minute Snocoach tour over the Athabasca Glacier. Tourists can pick up on the tour from either Banff or Jasper. This is how you can get through the Rockies without a car!

2 comments on “Walking on the Athabasca Glacier before it’s too late!”