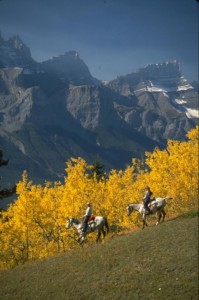 The Canadian Rockies town of Canmore, located just 15-minutes from Banff National Park, is a town literally built around recreation and entertainment.

From the 1890s up until the late 1970s, Canmore was a coal-mining town. When the mines closed in 1979 due to low demand for coal, it probably didn’t occur to people living there that the town had a future as a resort and recreation destination. The province dismantled most of the mining infrastructure over the next year, and the town’s population dwindled from 6,500 to a low of about 3,000. In many ways, Canmore became a blank slate, waiting for some new future to make its mark.

That came in 1980s, when the Canmore Nordic Center was constructed for the 1988 Winter Olympics, putting the town on the map as a recreation destination.

“That was really the turning point,” says Donna Trautman, manager of Rocky Mountain Ski Lodge in Canmore, and a long time resident.

The following decades would see incredible changes—the town became known not just for the Nordic Center, but also for the wide array of recreation activities it offers. The population boomed to its current 16,000, and an infrastructure to support tourism sprang up. Canmore now hosts a wide selection of stunning full service hotels, charming bed and breakfasts and every accommodation in between, as well as an eclectic collection of world-class restaurants, pubs and patios.

These days more than 20 former Olympians call Canmore home. And it’s no wonder why. Besides Nordic Skiing, Canmore is a world-class destination for sports such as ice climbing, rock climbing, hiking, skiing, mountain biking, dog sledding and golf.

Canmore resident Edward Keenan, manager of the Falcon Crest Lodge, says golfing here happens to be one of his favorite activities, partially because of the quality of the courses.

“We’ve got some of the best golf courses in the world,” he says, noting that Silvertip Resort’s golf course is home to professional golfer Steve Ames, and that Stewart Creek Golf and Country Club, “Is quickly becoming one of the most recognized courses in all of Canada.”

Both Keenan and Trautman point out that the town is also host to a wide range of events, from World Cup ski racing events held at the Nordic Center, to ice climbing and mountain biking championships, to folk music and its Mozart festival.

To get a feel for the town, Trautman recommends visitors take a drive along Three Sisters Parkway.
“You get a good view of the whole valley,” she says. “It’s very picturesque.”
She also recommends hiking Grassi Lakes.

The hike, she says, will take you to a pair of emerald-colored lakes, and near those, you’ll find a canyon that is a favorite for rock climbers, ice climbers, and a local population of owls.
Of course, there’s always plenty to do in town.

“Even if you’re after the take it easy vacation,” Keenan says, “Canmore has fantastic shops and spas that you’ll find nowhere else in the world.”

Keenan also recommends visiting the Oh Canada Eh Dinner Theatre.
“It’s a musical celebration of Canada,” he says. “You get a fantastic night of entertainment and a great meal.”

Both he and Trautman praised Canmore’s in-town network of nature trails.
“You can pretty much walk anywhere in town without having to use a city street,” says Trautman.
The trails give the town a feeling of being connected with the natural beauty that surrounds it, according to Keenan.

“After just a short walk, you can find yourself sitting by a bubbling brook enjoying the abundance of nature,” he says. “Canmore’s just got this great natural quality to it.”

And even if the Canmore trail system is as close to hiking as you get during your stay, the views from in town are about as good as they get. Canmore is surrounded by Grotto Mountain, Mount Lady Macdonald, Mount Lawrence Grassi and most famously, the Three Sisters.

On top of all this, Banff is well located, being only a 1.5-hour drive from Calgary’s International Airport, and 5 minutes East of Banff National Park, and 20 minutes from the town of Banff.