No trip to Jasper would be complete without a side trip to Maligne Lake. Separated from the Banff/Jasper Highway by the rugged Maligne Range, this 46 km. (29 mi.) road follows the glacial valley separating this range from the neighbouring Queen Elizabeth Ranges. The main access is along Highway 16, approximately 5 km. east of Jasper.

In 1875, railroad surveyor Henry MacLeod recorded the first non-native exploration of this valley. Looking for a route for Canada’s planned transcontinental railway, he found the valley to be blocked at its eastern terminus. Perhaps the best reflection of his expedition can be found in his dubbing the lake at the valley’s eastern end “Sore Foot Lake” (now Maligne Lake).

The lake remained quiet until 1908 when a Quaker from Pennsylvania, Mary Schäffer, hired local guide Billy Warren to take her to Chaba Imne (Stoney for Beaver Lake). Along with her was long-time friend Mary Adams. The party had explored Jasper the year prior, but had not been able to reach the lake before snowfall. Mary wrote in her journal:
“Indians, of course, had been there, but, unless a prospector or timber-cruiser had come in by way of the Athabaska River, we had reason to feel we might be the first white people to have visited it.”

As you drive this winding road, keep your eyes open for wildlife. Many a grizzly has been seen wandering its isolated hillsides and lakeshores. There are also potentials for black bear, elk, moose, mule and white-tail deer, bighorn sheep, and mountain goat. A camera and film are essential, but please stay in your vehicles when you see animals, and please keep a safe distance between your vehicle and the wildlife.

Crossing the Athabasca River over the H.J. Moberly Bridge, you pay tribute to one of Jasper’s earliest pioneer families. Henry Moberly worked as a Factor for the Hudson’s Bay Company, settling in the Jasper area in 1858. He lived until 1931, and this bridge, built in 1940, is dedicated to his memory.

Immediately after crossing the bridge, the road to Jasper Park Lodge branches off to the right. Beginning as a tent camp, it is now a destination resort operated by Canadian Pacific Hotels & Resorts. Along the road to the lodge, the road to Lakes Edith and Annette exits to the left. These spring-fed lakes are a popular day use are for locals and visitors alike. Technically, known as kettles, they were formed when huge blocks of glacial ice were buried by debris. As the ice melted, the overlying material collapsed into the depression, and the melting ice formed a small lake. In the summer, the lakes warm up to allow swimming—warm lakes are a luxury in the Rockies.

As you approach Jasper Park Lodge, you skirt the shores of Mildred Lake, locally known as Laundry Lake because of its proximity to the lodge laundry department. Watch for a large water spout in the centre of the lake. As the golf course tightens the taps on its irrigation system, the water backs up and sprays high into the air on Laundry Lake.

The lodge’s location may have been the original site of Henry’s House, the first permanent habitation in this part of the Rockies. Built in 1811 by William Henry, it became a popular stopping over place for expeditions heading into British Columbia. It was later overshadowed by Jasper House built on the shores of Brulé Lake. In the 1920’s, a tent camp was erected along the shores of beautiful green Lac Beauvert. This camp eventually grew into the present day lodge. Built by the Canadian National Railway, it was purchased by Canadian Pacific in 1988.

Continuing on the Maligne Lake Road

As you pass the road to Jasper Park Lodge, tune in your radio to AM 1490 (AM 1230 for French) for a Parks Canada radio broadcast on early adventurers in this area. For a pleasant picnic, take the side road to Fifth and Sixth bridge picnic areas, or continue on to Maligne Canyon.

At kilometre 6 (mile 4), an easy to miss sign indicates a viewpoint to the left. Take this exit for an excellent panorama of the Athabasca Valley and the town of Jasper. The Maligne valley is a classic hanging valley. Large glaciers are able to carve large valleys, and conversely, smaller glaciers carve smaller valleys. Since the Maligne valley glacier was merely a tributary of the much larger Athabasca valley glacier, it left behind a shallower valley. When the ice melted, the difference became obvious as the smaller Maligne valley was left stranded high above the much lower Athabasca valley.

From this viewpoint, near the lip of the valley, you get a wonderful view of the vastness of the valley left behind by the Athabasca valley glacier. Across the valley, Pyramid Mountain looms with its CNCP telecommunications tower on the summit. To the left of the townsite, Whistlers Mountain and its ever-present tramway rule the skyline. In the valley bottom, Jasper lies peacefully.

Shortly after leaving the Hanging Valley Viewpoint, turn left into the Maligne Canyon day-use area. Don’t miss this opportunity to see one of Jasper’s geological marvels. When glacial melt left the Maligne valley stranded high above the Athabasca valley, the Maligne River needed to find a way to drain its runoff into this lower valley. To accomplish this task, it began to rapidly erode this narrow canyon to reduce the difference in altitude between the two valleys. In some cases, the canyon is only a few metres wide, but as much as 50 m. (160 ft.) deep.

The trail is well maintained, but gets steep in places, so take your time and enjoy the magic of the place. Despite its beauty, the canyon has an almost hypnotic effect on visitors, particularly photographers. Avoid the temptation to climb past barriers for the perfect image. Many photographers have died here doing just that. Enjoy the magic, but please stay behind the barriers. They are there for good reason.

Much of the drainage from the surrounding mountains leaves this valley through a hidden drainage network of underground caves. Medicine Lake dramatically illustrates the effectiveness of this underground drainage system, and gains its name from its curious habit of vanishing every autumn. It acts like a large bathtub with the plug pulled. If you add water fast enough, the tub will fill with water despite the water running down the drain.

In the case of Medicine Lake, upwards of 24,000 litres (4,000 gallons) of water go down the drain every second. During the runoff of summer, enough water is flowing into the lake from local streams to surpass the drainage. Before long, the lake bed begins to fill, and by late spring, Medicine Lake is in its full glory. By September, the runoff has dropped off, and the lake rapidly drains.

The cave drainage system beneath Medicine Lake resurfaces below Maligne Canyon, more than 17 km. (11 mi.) downstream. This qualifies it as the longest underground drainage system in the country. On two different occasions, attempts were made to plug the drain, once using old mattresses, the other using magazines—neither had any effect.

Medicine Lake also provides excellent opportunity to catch your dinner. Its quiet waters teem with eastern brook trout. These fish were originally stocked in 1927, and since then have thrived. Prior to this, there were no fish in the lake—after all, how would they have gotten there? With its underground drainage system, Medicine Lake has no above ground outlet to allow fish to migrate upstream. It is formed strictly from glacial runoff.

At kilometre 35 (mile 22), the road passes the takeout point for whitewater rafters and kayakers. Keep your eyes open for some of these icy adventurers. The frigid waters of the Maligne River rarely surpass a few degrees above freezing, but despite its chilly nature, the stretch between Maligne Lake and this pullout represents one of the provinces most popular rafting destinations.

At kilometre 41 (mile 25), the road crosses a bridge over the Maligne River. Looking upstream, a large rock is visible in the middle of the river. This rock was showcased during filming of the 1953 classic Rose Marie, starring Howard Keel and Ann Blyth. No, Nelson Eddy didn’t sing to Jeanette Macdonald here, despite the sign in the Maligne Lake Restaurant! It was the remake of this classic movie that was actually filmed here.

Welcome to one of the most picturesque spots in the Canadian Rockies. Nestled between Leah Peak, Samson Peak and Mount Paul on the left, and Mounts Charlton, Unwin, Mary Vaux and Llysfran Peak to the right, it offers unlimited photographic potential. The lake was created when a landslide off the surrounding Opal Hills released almost 500-million-m³ (almost 700 million-yd³) of material into the lower valley. This natural dam caused the water to backup forming the present lake. Like Medicine Lake, fish stocking in the early part of the century has created a fisherman’s paradise. Don’t forget to pick up your National Park fishing license before hand. 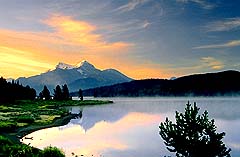 Boat tours along the lake are a must for visitors to the area. Culminating with a visit to world famous “Spirit Island”, they offer endless views of the surrounding ranges, and provide the most civilized way to see the further reaches of this magnificent lake.