Robson Provincial Park is home to a variety of mammals characteristic of the Rocky Mountains and the Boreal Forest including the largest and most spectacular of the continent’s wildlife such as the moose and the grizzly bear; and array of fur-bearing carnivores which figures prominently in Canada’s early history and a variety of small but important rodents, shrews and lagomorphs.

The large herbivores are resident within the park, performing only short seasonal migrations which are mostly altitudinal in nature. These migrations coincide with the seasons and can be linked with the ebb and flow of the tide. In summer the animals move up and disperse; in winter they move down and concentrate.

Moose in the vicinity of Robson Meadows

Goats generally stay close to their units of home range, while moose and caribou move much greater distances. A band of goats can usually be seen on Cinnamon Mountain N.W. of the viewpoint.

In winter moose concentrate in willow jungles at lower elevation such as the Moose Lake marsh area and deciduous forests in the vicinity of the Fraser River near Robson Meadows. Winter range is the prime factor in the distribution and abundance of ungulates. 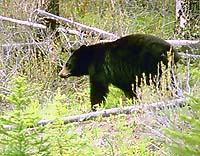 Black bears are common in the Robson Jasper area

Robson is bear country with good populations of both black and grizzly bears. Visitors are most likely to see the former species.

Small fur-bearers such as weasels, mink, marten, and otters are moderately common in the park but seldom seen by visitors. Red foxes, coyotes and wolves may sometimes be met along trails and the highway. Since these animals are usually crepuscular or nocturnal, observations are often limited to fleeting glimpses around a corner of a trail or a flash in a car’s headlights. Frequently the only signs of mustelids and canids are their tracks and droppings.

Much can be said for muskrats and beaver. Muskrat houses or “push-ips” (trapper jargon) are a feature of Moose Lake Marsh. Beaver workings can be found along the Fraser River Nature Trail below the Nature House and abundantly at Lucerne on the Labrador Tea Trail. Beavers, perhaps because of their highly visible engineering abilities, their affects on boreal forest ecology and their national recognition as the Canadian symbol, are a favourite with both interpreters and visitor.

Columbian ground squirrels, hoary marmots, varying hares, porcupines and a multitude of mice, voles and shrews make Robson their home. Ground squirrels and marmots are local in distribution but diurnal in habit. Their sedentary habit and usually approachable nature make them popular subjects for photography.

Varying hares may be abundant and noticeable when at their cyclical peaks. Their affect on the regeneration of deciduous trees (prime winter food of hares) is considerable.

Porcupines are often seen by hikers. In summer they spend most of their time on the ground feeding on a variety of herbaceous plants; in winter they are mostly arboreal, subsisting on a diet of inner bark. The lodgepole pine is the porcupine’s favourite food tree. The porcupine climbs to top branches then eats its way down leaving only a white skeleton behind.