How Golden was Founded

It was adventure that brought the first explorers over the Canadian Rockies. But it was the treasures of Golden that made them stay. Despite its increasing list of stunning hotels and varied activities, the area still exudes the same feeling of discovery and exploration the first pioneers felt. 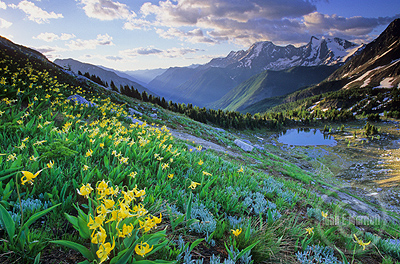 Jumbo Pass, one of the many beautiful places near Golden.

Back in 1807 David Thompson first crossed over the Rocky Mountains and traveled along the Blaeberry River to the future site of Golden. In search of the Columbia River and, ultimately, a passage to the Pacific Ocean, it was Thompson’s sense of exploration that led him here. Thompson’s travels took him to the junction of the legendary Columbia and Kicking Horse Rivers.

Golden would simply not exist without the Canadian Pacific Railway (CPR). In fact, the railway’s presence helped establish Golden’s place in Canada. As the CPR constructed its cross-country network of rails, it used Golden as a base camp as it extended further into the western part of B.C. The railway was completed in 1885 and Golden soon became a prominent stop on the line. The CPR also paved the way for the Trans-Canada Highway, which helped to transform the area from forest outpost to a true community.

The CPR recognized many travelers through Golden would want to stay, explore and discover the incredible area for themselves. To this end, the CPR hired Swiss guides to assist in providing connections to this compelling yet rugged landscape. In 1899, Eduard Feuz Sr. and Christian Haesler came to Canada from Switzerland to serve as mountain guides. In 1911, the CPR built homes for them as well as other guides in Golden and named it the ‘Swiss Village’, or ‘Edelweiss.’ This village provided a base for the now-famous Canadian Alpine Club which, in turn, drew many more guides from Switzerland in the following years. The village is still situated 1.5 kilometres west of Golden.

For well over a century, Golden’s fortunes have been linked with the forest industry; sawmills have come and gone, been burned down and rebuilt and are wrapped in a list of owners as long as a Douglas Fir log – where the health of the industry went, so went Golden’s well being. The forest industry was initiated with the building of the CPR Railroads, which required 3,000 railroad ties per mile. There was also demand for buildings, bridges, trestles and snowsheds, some of which took huge quantities of large timber.