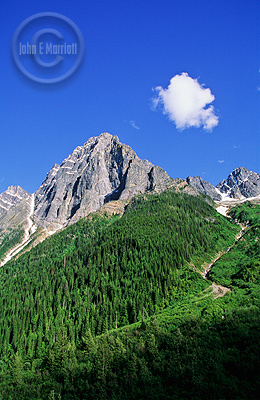 Get a bird's eye view of the mountains around B.C.

Everybody has dreamed of being a flying penguin at some stage. Well, at Golden you have the chance to kill two birds with the one stone, so to speak. No, you can’t become a penguin for the day but you can launch off a cliff with nothing but the wings of a paraglider above you and admire the stunning views of Golden’s Canadian Rockies from above.

Golden is a world renowned gliding Shangri-la. Paragliding embodies the sheer thrill of flying through the sky without an engine. Paragliders are a free-flying, foot-launched wing with the pilot attached and suspended in a harness below. Gliders look for thermals or ‘updrafts’ of warm air that enable them to fly for hours and range over wide distances. In fact, paragliders can climb faster than some aircraft: A 206 Jet Ranger helicopter climbs at 800 feet per minute while a paraglider in an expert climb can reach speeds upwards of 2,000 feet per minute! Note: don’t challenge 206 Jet Ranger Helicopters to a race should you meet one.

Mount 7, one of Golden’s most spectacular mountains, was host to the National Paragliding Championships in the summer of 2007. As well, one of the most popular flights from here cuts south to the small community of Canal Flats. The extraordinary 145 kilometre flight was recently described in the prominent glider magazine Cross Country as one of the “top, classic cross-country flights of all time.” In fact, eight world records for distance and time have been set from the launch at Mount 7. Maybe you could be next.