Depending on the season, there are several ways to experience the stunning sights of the Canadian Rockies. During winter, it’s hard to beat the views while skiing. In summer, there are even more options. Sure, you can take a hike or take a tour but for exhilaration as well as sights, white water rafting Golden is hard to beat. 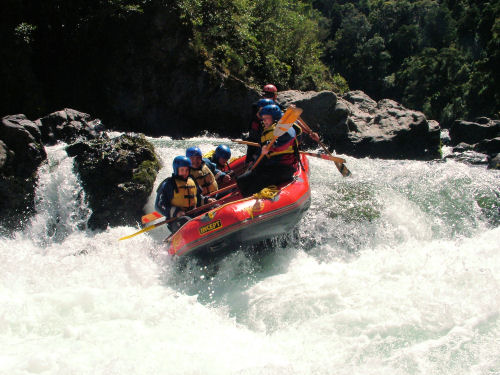 The whitewater of the Canadian Rockies will satisfy the biggest adreneline junkies.

The legend of Sir James Hector and the crazy horse might have been the inspiration for naming Kicking Horse River. But the river itself hasn’t been shy in living up to its untamed reputation.

The Kicking Horse River is one of the wildest, most intense waterways in Canada, if not the world. But don’t get intimidated. Kicking Horse River boasts unparalleled white-water rafting excitement for rafters of all levels. Witness some of the world’s most incredible scenery in the world along the way and perhaps spot some extraordinary wildlife. Depending on the time of year, look for moose, deer, elk, black bears, grizzly bears, mountain goats and bald eagles along the river banks.

Rising from Wapta Lake and joined by the Yoho, Emerald, Amiskwi and Ottertail Rivers, the Kicking Horse flows wild and free, unobstructed through some of Canada’s most spectacular mountain terrain. As an ecological, recreational, and historical jewel of the Canadian West, the Kicking Horse enjoys the distinction of being the first river in B.C. to be recognized as a Canadian Heritage River.

Golden is conveniently perched near the hydrological apex of North America. In everyday terms, this means all melted ice from Golden’s surrounding glaciers and snow field’s flows downhill.

In a kayaker’s terms, this means some of the stoutest flow on earth. There are over ten rivers within an hour-and-a-half drive from Golden. With skill levels ranging from I (calm water, scenic routes) to V (expert, or a ‘hero route’), there are incredible routes for every paddler. Be careful not to take the hero route too literally!

For Kicking Horse River, come late springtime (around late-May or early-June) when the snow is melting, all that run-off comes barrelling down the mountains. High water season lasts around six weeks, until about mid-July, but great paddling trips can be enjoyed from May to September.

If white-water isn’t your speed, check out some of the flat-water trips (larger ‘sea kayaks’ or canoes). There are many casual levels I or II routes for those wanting an exhilarating day without the daredevil component. Check out the Columbia or Blaeberry Rivers for a day of comfortable current and beautiful wildlife. This is perfect for family trips.