Text and Photography by Mike Potter
For www.CanadianRockies.net

This gentle hike allows some of the most beautiful views on offer in Banff National Park. Leave your things at your hotel, don your best hiking shoes and a bottle of water and prepare yourself for the beautiful path to Lake Agnes.

The steadily climbing but deservedly popular trail to Lake Agnes brings you to a mesmerizing body of clear water set in a wild steep-walled cirque.

The first 1.6 km travels through subalpine forest, whose two main tree species you can readily become familiar with by examining their needles. Those of the subalpine fir are two-sided, with rounded ends; using alliteration, you can think of “flat, friendly fir”. The needles of the Engelmann spruce (named after a botanist) are four-sided, with sharp-pointed ends – thus “square, spiny spruce”. The bark of these trees also helps in identification: subalpine fir has smooth grey bark with bubbles of sap underneath, whereas Engelmann spruce has rough, corrugated bark.

The opening that you reach at km 1.6 is a result of winter avalanche activity. It grants views across to Fairview Mtn., where you may spot people who have scrambled to the summit (see Fairview Mountain description). This vantage point also allows you to look down upon Lake Louise with its typically turquoise colour; the apparent miniaturization of any canoes you see reinforces the fact that you have already covered almost half of the elevation gain to Lake Agnes. 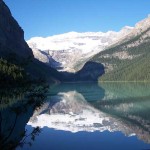 The stunning view of Lake Louise.

The trail doubles back from the first switchback, then curves around to the junction with the horse trail from Lake Louise. (Although, as the sign here indicates, the distance to the Chateau is less by the horse trail, I recommend sticking to the footpath since its grade is gentler and thus easier on the knees for the descent.)

You reach Mirror Lake 300 m farther on. This body of water is small in size but has a spectacular setting with the near-vertical east face of the Big Beehive rising above it. The cliff’s horizontal layers, from which this feature gets its name, show the sedimentary origin of the entire Canadian Rockies. The whole range is made of rock laid down particle-by-particle in the sea that once covered this area. The rock was then uplifted, folded, and fractured by powerful forces during a long period of mountain building.

Keeping to what seems to be a tradition in the Lake Louise area, there is ambiguity about the origin of the name of Lake Agnes. Lady Agnes Macdonald, wife of Sir John A. Macdonald, visited the area in 1886, taking the somewhat undignified but certainly exciting approach of travelling up front on the cowcatcher of a Canadian Pacific Railway steam locomotive. On a later trip she walked up to the lake – which was then known as one of the “Lakes in the Clouds” (the other is present-day Mirror Lake) – led by Willoughby Astley, first manager of the Lake Louise Chalet (1890 – 1894).

As it happened, Mr. Astley had led Agnes Knox, a “Toronto elocutionist”, to the lake just a few days earlier. He relates: “Now we were in a fix, as Lady Macdonald understood from high C.P.R. officialdom that she was the first woman to be shown those lakes.” By chance, the first names of the two women coincided, and the prime minister’s wife seems to have been satisfied with sharing the honour.

0.0 – Sign at junction (elevation 1730 m). Take the trail to the right, going up a gradual incline.
0.2 – Pavement ends. Keep straight, crossing the horse trail to the Plain of Six Glaciers. Begin steady climb on a constant grade.
1.6 – Switchback in an avalanche gully (1920 m).
2.4 – Junction with horse trail. Keep left.
2.7 – Junction at Mirror Lake (2030 m). Turn right along trail that starts 10 m back from lake, and begin a series of switchbacks. (Trail to left joins Highline trail toward Plain of Six Glaciers in 100 m).
3.2 – Junction (2105 m) with direct route to Little Beehive: this 500 m long connector joins the Little Beehive trail from the Lake Agnes teahouse at km 0.3 – thus saving 100 m if the Little Beehive is your first objective. Keep straight for Lake Agnes.
3.4 – Wooden stairs beside waterfall.
3.5 – Lake Agnes (2120 m) and teahouse.