Getting to Banff from Calgary

As far as confusing drives go, the trip from Calgary airport to Banff must take the biscuit. After what may have been a long flight, the last thing you want to do is stress on new roads. If all goes well and you don’t end up circling suburban Calgary for 6 days, the drive should take no longer than 90 minutes. Considering Calgary is the gateway city to the many wonders of the Canadian Rockies especially Banff, Canmore and Lake Louise, one would have thought that it would be better signposted. Don’t worry loyal reader, here are some solid directions courtesy of Google Maps to make sure you make it to the safety of your Rockies’ hotel in one piece. 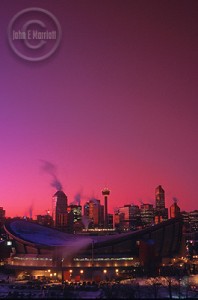 The skyline of confusing Calgary.

10.Take the exit toward Banff

Canadian Rockies Sightseeing Tours now offers day trips and tours from the Canadian Rockies to the world-famous Calgary Stampede and Exhibition. Browse  several tours ideas below and you’ll have to plan for events like Chuckwagon races, the Rodeo, the midway (amusement park), concerts, the Grandstand Show and more. This year’s Stampede runs from July 3-12, 2009 – so book early to ensure availability.

Calgary Stampede Day Trips
For 10 days every July, Calgary is the the place to be for a taste of the Canadian West! At the Greatest Show on Earth you’ll take in the Stampede Grounds (midway, live entertainment, agriculture & livestock exhibit, and food booths), the Chuckwagon Races, the Grandstand Show and the world-famous Rodeo. These tours include a round-trip transfer between Calgary and Banff/Canmore.

Posted by Administrator May 1, 2009 Tours from Calgary
Leave a comment

At the foot of the awe-inspiring Rocky Mountains glitter the impressive skyscrapers of downtown Calgary. A city where visitors and locals alike enjoy a vibrantly diverse life of dance, theatre, art, musical and sporting entertainment as well as culinary delights to compliment the most discriminating palate.

Calgary, considered the ‘Heart of the New West’, is located in south western Alberta, in a region of foothills and high plains. It is the third largest city in Canada and shines with optimism and possibilities for the future. It has many things to offer those who love the city life, as well as the great outdoors, with the Canadian Rockies only an hour away.

Calgary is a cosmopolitan financial centre with first class shopping, theatre, galleries, restaurants, ballet, concerts, dazzling nightlife, jazz festivals and professional hockey. Calgary has been called the showcase city for Canada. The shopping in Calgary is a shopper’s wonderland, as Alberta is the only province in Canada without a provincial sales tax. Here you can find numerous local arts and crafts, handmade by Calgary locals.
Calgary City Tours
Calgary’s legendary western roots and pioneering spirit are still evident in today’s dynamic city. Highlights include the major historic and modern attractions that Calgary has to offer.

Canadian Rockies Tours
Enjoy full day excursions that take you from the city of Calgary through the rolling foothills and ranching country into the Canadian Rockies. Experience the beauty of Banff and Lake Louise as you listen to our stories of the people, geology and history of these mountain towns.

There are more than 25 museums located in Calgary that showcase Calgary’s western history. One of these museums is located at the site of the 1988 Winter Olympic Games. At this location, there is a 90 minute bus tour of where some of the events were located, including bobsleigh, luge, ski jumping and freestyle skiing. You can also see bobsleigh and ski-jump simulators at the Olympic Hall of Fame & Museum.

Built to honour Canada’s Centennial, the Calgary Tower overlooks downtown Calgary. The tower, completed in June of 1968, was originally called the Husky Tower, but became the Calgary Tower in 1971. Outstanding views of the city can be seen from the observation deck from glass floor, which looks over 9th Avenue SW and Central Street North.

Get out your cowboy boots for the annual ten day Calgary Stampede. The stampede is held every year at the Stampede Park the first week in July. It is the largest outdoor show on earth. This tribute to the Cowboy is a time of street dancing, barbeques and Calgary hospitality for all. The parties go all night and the fun is everywhere. Many different rodeo events can be seen here including bull riding, saddle bronc, steer wrestling, and wild pony racing. You can also visit the Saddledome for various concerts and Nashville North for original Stampede night life.

Some other interesting places to visit in Calgary would be the Calgary Zoo and its Botanical Garden and Fort Calgary, the original home to the North West Mounted Police.