Banff and Jasper weren’t just given the name of National Park because it is a catchy addition. Under this tag, the nature and animals of the Rockies have been protected and it is now as much a home to them as it is to people who live here. As a Banff local, I rarely pass a day without seeing an elk sipping water by the Bow River or at least a couple of Ravens fighting aggressively for a delicious piece of bread. Jasper, if anything, is even better endowed with a choice of animals to gaze at. 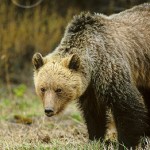 The Grizzly bear with his distinctive shoulder muscle.

There are 69 different kinds of mammal that call Jasper home including 29 smaller mammals such as the Hoary Marmot, ground squirrel and porcupine (don’t try and pet the porcupine). These smaller guys are relatively common to see but most people are after the big and more elusive boys. Wolves, coyotes, cougars, moose, elk and mule deer all call this National Park home. Of course the Black bear and Grizzly bear also live in these parts though you may not be as excited to see those as you walk alone through the woods. Trust me – the eyes play tricks after a while and every tree trunk becomes an angry Grizzly in your head!

Your best chance to see Wolves are around the Snaring River and highway 16. During winter, you can often spot them on the Maligne Lake Road. Coyotes hang around the same spots or in open prairies too. Obviously don’t try to get too close, if they are feeling a bit cranky, they do get aggressive. Elk too, during rutting season can get very aggressive if you venture into their territory. The Bull elk, during fall, will use his antlers as a weapon and can do some serious damage to those who get in his way. 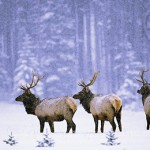 It is very common to see Elk around Jasper National Park.

There are about 300 Black bears living in Jasper’s forests though they can also be cream, cinnamon or brown coloured. Grizzlies are much bigger than their Black relations and are distinguished by a huge hump of muscle across their shoulders. Jasper National Park has around 200 grizzlies making it one of the worlds largest protected bear populations. If you spend at least a day or two in Jasper, you would be extremely unlucky to not come across some wildlife. You would also be pretty unlucky to come across a tree trunk that actually turns out to be a bear!