Canmore and Banff are well known for having some of the best terrain for outdoor adventure in the Canadian Rockies, which is why this is area is perfect to have an adventure wedding.
“Adventure wedding” is not a term you’ll find in your Webster’s, so we’ll loosely define it as a wedding that takes you out of any traditional wedding sites, to somewhere wild, possibly involving a recreational activity, and maybe even an adrenaline rush. Specifically, we’re talking about weddings performed on skis, in white water rafts, after hikes, climbs or a long dog sled ride. You get the idea. 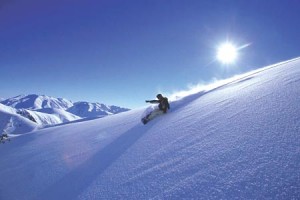 Could this be the site for your adventure wedding?

So how exactly do you arrange an adventure wedding?

Rick Kunelius is a good place to start. Kunelius is a marriage commissioner out of Banff whose motto is “I’ll marry you… anywhere.”
Saying you’re capable of marrying someone anywhere in a park as wild as Banff is pretty bold, but Kunelius is certainly qualified. Before becoming a commissioner in 1994, he spent more than twenty years in the Canadian National Parks Warden Service doing mountain rescues, avalanche control, law enforcement, backcountry horse patrol, and wildlife management. During his last ten years with the service, he was the Senior Wildlife Warden for Banff National Park.
Since becoming a commissioner, he’s helicoptered, skied, climbed, hiked and ridden sleighs, horses, and dog sleds to wedding sites.
“You can get married anywhere you can put five people,” he says. “Really.”
His only qualifying statement, that five people are needed, refers to the commissioner, the two witnesses, and (obviously) the couple to be married. If you can get these five people somewhere, you can get married there. Chances are, Kunelius won’t put much limit on your imagination.
The most extreme example of his willingness to wed is a marriage Kunelius performed on the summit of 11,000 ft. Mount Hector at 8 am.
“We did the climb at night,” Kunelius says.
“We were on ropes at the top, and at 8 am they leaned back over the edge with several thousand feet behind them, and I performed the ceremony.”

Maybe your perfect wedding will take place on a mountain top. © John Marriott

Of course, climbing mountains at night isn’t for everyone, but if you have a passion for outdoor recreation, there’s probably a way to get married while you play.
Patricia Compton, a marriage commissioner out of Canmore, Alberta, says her favorite recreation weddings are on dog sleds in the Spray Lakes area.
“They just take the couple out, the commissioner and your witnesses,” she says. “They pick a beautiful location out in the middle of the lake, they have the wedding, and then off they mush.”
In the Canmore/Banff area there are several ski mountains to get married on, including Mount Norquay, Sunshine Village, Lake Louise and Nakiska. Kunelius and Compton generally recommend ski weddings for small groups.

Angela Schrempf, local wedding planner and owner of Sweet Occasions, suggests marrying while rafting the Bow River from Banff to Canmore to add a little adventure to your wedding.
The ride doesn’t have to be whitewater, she says, “There are some months where you wouldn’t even get wet.”
She recalls a trip down the river with some friends last summer to illustrate other adventures to be had on the Bow River
“We were rafting down the river and stopped off at one of the many rocky islands with a couple friend. We had just left the raft, and there is a grizzly bear, probably 10 feet tall, standing 10 feet away.”
Needless to say, Schrempf’s party avoided a grizzly encounert and quickly returned to their raft.

Wedding in the sky

If you want something different and adventurous, but aren’t a skier, rafter, hiker or climber, you may consider having a helicopter transport you to your wedding site.
The ride will offer you the most unique and stunning views possible of the Canadian Rockies, and can take you to amazing, secluded locations you’ll never forget.
Jo-anne Kobelt, an assistant manager at Alpine Helicopters, says, “We’ve never had a customer that doesn’t have a look of astonishment on their face once they’re in the air.”
Locations for heli-weddings are limited by environmental guidelines that minimize disturbance to other wilderness users. The wedding party can include the bride, groom, commissioner, photographer and up to eight guests.
If people are looking for a unique and adventurous wedding ceremony, Kobelt says this is it.
“The average bride wants to walk down the aisle with 200 guests, and have five-course reception afterward,” says Kobelt. “This isn’t for her. This is for the girl that wants to put her hiking boots on under her dress and have some fun.”
But, she advises, “Don’t spend too much on your hair, because when you get out of the helicopter, your hair do is done.” 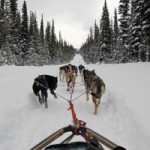 Sled dog's provide a unique way to get married in the Canadian Rockies.

Kobelt points out that a helicopter wedding is less expensive than a traditional wedding. And that, “People say they feel more secure in a helicopter than in an airplane,” she says.

While there may not be a limit on what kind of recreational activity you can be doing while you get married in the Banff and Canmore area of the Canadian Rockies, your choice of recreation may put some limits on the wedding.

In general, weddings on ski slopes, mountaintops, and backcountry trails will have some limits on the number of people you can bring.
Kunelius likes to remind people that they are planning to get married in a high-altitude environment, where weather is subject to quick change.
“For any outdoor event,” Kunelius says, “I ask, “What’s our back up for lousy weather. Plan for the worst, hope for the best.”
For more advice and information on getting married in the Banff and Canmore area, check out our wedding guidelines page.